And here it be! The second book in the Curiosities series is finally out. It's available in e-book and print format, and here's the book page over at Books2Read.

The print book is available through Amazon, though I'm sure you can go through other online vendors via Indiebound to snag a copy. This is a standalone in a series, so you're not required to read Dollhouse first before diving into it. Some of the characters from that book get a brief mention if only to tie in the AU world of the series as well as to establish the deep friendship between two orphaned young men.

Automata, though, is very much Alexej's story from start to finish. And as promised, here are a few things about the book:

1. Alexej Sauveterre is only 17 years old in the novel, but it's not a YA story by any stretch. There are three fairly erotic moments involving him, but they're not long and detailed for pages on end. If anything, they're pretty much of the blink-and-you'll-miss-it variety save for the third and last moment, and none of them are gratuitous. They are, very much, indicative of Alexej's state of mind - his loneliness, his lack of confidence, his conviction that he's pretty much a loser in all things, especially his health. And his belief that, sadly, he won't live long enough to experience adulthood.

2. I finally, finally took inspiration for a walking, talking puppet (a cursed one in this case) based on E.T.A. Hoffmann's The Sandman. Those of you who've been following me for a while now know just how much I love Hoffmann's work and am just itching to do something based on his Nutcracker and the Mouse-King down the line. For Automata, the creepy figure of Coppelius hovering in the background and manipulating events via Olimpia (the dancing puppet) finds his way into Alexej's world as Viduus granting Alexej's dearest wish.

3. The setting is AU Venice, where the Sauveterre family own a large house (like a vacation home of sorts), and as with the first novel in the series, all city names are based on patron saints of what those cities stand for. Naturally, this AU Venice is called San Marco, and as with St. Jude in Bohemia, San Marco has its own supernatural guardians who are summoned by the winged lion (the symbol of St. Mark).

4. There's a callback to Hell-Knights in that the way for Alexej's soul to be corrupted and claimed is through blood, a.k.a., vampirism, though there are no vampires anywhere in San Marco. The drinking of blood is extremely light and even not very obviously vampiric and is pretty much specifically designed for Alexej and no one else. But I thought I'd tie in some Venetian folklore involving the darker side of the supernatural.

I do hope you enjoy the novel (and/or the series). Please do take the time to leave a review to help me get the word out. I no longer put out feelers to book reviewing blogs, so I'm pretty much on my own when it comes to promoting my novels.

And for October's e-book sales, we have Hell-Knights and Wollstone. 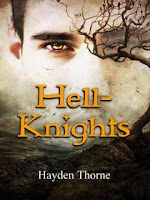 Hell-Knights is the third book of the Arcana Europa series and is the last of my self-published mega-novels that isn't a relaunch. It takes place in an AU Venice, the focus of that city's magic being that of vampire-hunting. There's a very heavy emphasis on Catholicism (but of course!) with the use of churches and iconography and all that, and there's equally a heavy emphasis on gothic romance tropes by way of the brooding hero (Michele) and the naive foreigner (Gabriel).

Want more? How about a lot of play on mythology? Decima, Nona, and Morta (Maurtia in the book) figure largely in the story and dictate their representation via the forms I gave them, in a way. Decima is the city. Nona is the ghostly bell that chimes as an alarm whenever revenants are around. And Morta / Maurtia is the cemetery that's also (quite literally) dead, i.e., completely devoid of even shades of former lives.

Catholicism? Why not more? Michele (Michael - the warrior), Gabriel (the messenger in more ways than one), and Rafael (the healer, not human in the book but a church of healing). St. Agnes or Sant'Agnese, the abandoned and corrupted church, pretty much representative of innocence lost. The twelve clans (scattered all over Italy) who are descendants of chosen bloodlines tasked with protecting their regions from vampire scourges. See: the twelve apostles. Three vampire hunters in the De Santis family to represent the power of the number three that's prevalent in legend, folklore, religion, etc.

And so on and so forth. So you can pretty much tell that I had a wild old time writing this book, throwing in a crazy amount of mythology, religion, and all other things to give Decima and Italy a personality of their own.

For a copy of the e-book, go here. It will be available for 99 cents through October.

And finally, Wollstone. It was a gay YA novel that was partly inspired by classic boarding school romances between boys with a generous helping of Medieval French chivalric romances thrown in. The school itself is very much far removed from the real world and is a small idyllic bubble that's part otherworldly fantasy and part not (and definitely much, much less so on the latter).

The theme of the novel centers on reincarnation and the idea of being given a second chance, literally, by forces you've no control over. Everything about Wollstone Academy is manipulated by invisible strings but also closely monitored by some very strange and special students. Emil Gogean's task is to prove himself worthy of that second chance by responding to certain challenges given to him by those mysterious forces or entities.

The setting and the location are very much fairy tale-like as well as very dream-like. It's all done on purpose to give Emil and his adventures a very strong romantic edge (with a touch of creepiness worked in).

And for a copy of the e-book, go here. It's also available for 99 cents through all of October. As always, thank you, everyone, for your support, and I hope you enjoy the books.