And Kill My Darlings, I Did (Plus Renewing My Love for Sherlock Holmes)

I took Tuesday off from the day job, and while it's been a pretty laid back day, I still took to my laptop to purge stuff from Eidolon and get started on some major rewrites before completely setting the file aside for the rest of the month.

The first version of the story boasted twelve chapters before I decided to put a stop to any forward momentum. The revised one has four. So that's eight chapters total that I had to drop (though I did save the original file and stored it in a "trunk" folder with the rest of my unfinished and rejected drafts and so on).

Yes, I killed my darlings, and I'm about to forget about them for the next twenty-five days. Come Friday, I'm ready to break open Agnes of Haywood Hall and (hopefully) enjoy the hell out of revising the book. 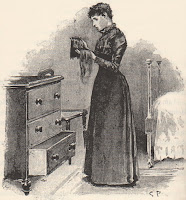 I've been watching the Granada production of Sherlock Holmes with Jeremy Brett on Youtube, and I'm having such crazy nostalgic flashbacks to those days when life seemed a lot less complicated (or at least adulting hadn't yet morphed into the shambling ghoul that it is now). The episodes have also reminded me that I don't have the complete collection of Sherlock Holmes mysteries in my Kindle - and I never really owned any book of the kind.

My pride and joy back in the day was a book containing maybe a majority of the stories plus The Hound of the Baskervilles, but their selling point to me then was the fact that the anthology contained the original illustrations that came with the stories when they were first published (I think).

Oh, lawd above, I love them. The first set of stories I highlighted might have made for fantastic novels had Sir Arthur Conan Doyle decided to expand them into much longer works. I'd have completely eaten every one of them up (and re-read the hell out of them many times over, to boot).

There are some minor changes in the Jeremy Brett adaptations of the stories, but in some cases, they actually added a lot more to the plot (i.e., "The Adventure of the Musgrave Ritual" involving the servant), and watching the unedited versions on Youtube is really giving me life.

Anyway, at the moment I'm cherry-picking my way through those episodes, and I'd love to dig into the black and white classic films with Basil Rathbone. I'm not a very good Holmes fan for failing to check out the early incarnation of my favorite detective, I admit. I really should see one at the very least.