'Eidolon' Switches Gears From 'Rebecca' to the Myth of Narcissus 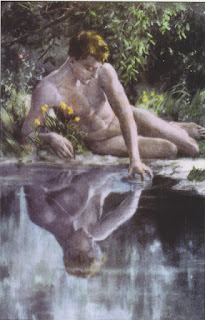 And other fun things, I suppose. I had the core of a story for the first book of the Curiosities series called The Heart of Ameinias, and it had everything to do with the Narcissus myth and the idea of impossible love. The story didn't take fruit, was dismissed, vanished in the proverbial ether, and Dollhouse took its place.

Now the idea comes alive again, though in a wholly different way as there's going to be a bit of a twist to the cursed wish element of the novel.

I mentioned before that Eidolon has some Rebecca vibes, and as it continues to evolve as I write it, du Maurier's ghost has taken the back seat somewhat and will be a lot less influential in how Emerick's story unfolds, but Greek Mythology will be front and center.

It's a bit of a combo, I guess, and that seems to be working best for the story. As of now, I've actually been inserting chapter after chapter to bridge the gap between Emerick's childhood and his terrible experience trying to land himself a job. From the age of four to the age of twenty, there's this massive chasm that needs to be covered first before I march forward with his story.

The Rebecca / "Ligeia" (there are some shades of that story as well) elements will show themselves once I get going with additional chapters in which Emerick is older. It'll be a fun ride for me once I get to that part. Maybe not fun for Emerick, but definitely for me.

That vague plotbunny I had regarding a PoC solving mysteries remains extremely vague, and I'm still sitting on it and trying to keep that option open. I'm being reminded about my previous resolve to make Curiosities and Ghosts and Tea my last two series as an indie writer, and as it always happens, when I'm not writing, I'm always bombarded with so many ideas and so much inspiration for new stuff to tackle.

But the moment I sit down to get actual work done, my shoulders, neck, and back muscles rise up in mutiny against too much time spent at the computer. And when I say "too much time", I mean more than an hour of typing away (with some Googling interspersed throughout). I recently bought a new spiral-bound notebook and a new set of cheap pens, so I could get back to writing my draft in longhand, which means sparing my muscles whatever minutes I could shave off being at the computer.

It hasn't happened yet. Hopefully it will soon enough.

Anyway, what does all this have to do with the vague plotbunny I mentioned? These physical reminders of time spent writing are discouraging me from following through with anything new regardless of how promising the ideas are. I'd love to be able to do it, really. I still hold on to the hope that maybe I will. But I also want to be realistic about my abilities to weather the process, and considering how precarious things are now with regard to work, paid time off (for health or whatever other reason), etc., I'm not going to gamble on anything.

Health and safety first, writing and publishing second. I'd like to be positive about things, but I also want to be realistic. And if being realistic means giving up on certain things, so be it. I know how to roll with the punches. However, I'll continue to remain open to opportunities (within reason) and will jump on them as long as I'm able to handle the job. So that vague plotbunny will remain vague and kept within sight, but it'll be easily let go should the situation dictate it.

And in other news, we're heading down the final stretch of September. I do have a couple of e-books on sale all this month for 99 cents each, and you can read up a little more on them here. I also have The Ghosts of St. Grimald Priory now available in both e-book and print, and you can check out the blurb over at the book page here. October will bring another set of e-books for sale as well as a new release: Automata. But y'all already know that, yes? Yes.

It really feels like a lifetime ago since I finished that novel. Zoiks! I'm glad the time's finally arrived for it to be unleashed on the world.