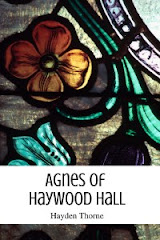 I finally finished the revisions for Agnes of Haywood Hall, which turned out to be a damned lot of fun because part of the rewrites included the addition of another voice to the mad collection of proper Victoriana. I'll be revealing who down the line, but it's there to add to the humor.

So for now, the current word count of the novel is 57K+ words, and I'm pretty darned pleased with how things worked out. This is one series I'm so glad I decided to tackle because it's giving me the best kind of challenge whenever I dive into it. And I'm now really itching to polish the book, submit it for pre-order, and then begin the third novel in the series, but that's really jumping way ahead of myself.

I am very much hoping that both Ghosts and Tea and Curiosities will end up with more than three books each. As I get myself back to Eidolon, I'm already giving a couple of future book ideas the sexy side-eye, and they'd be great additions to each series. I mean, I haven't even started on A Most Unearthly Rival, and I'm starting to hear the soft rapping of a fourth novel idea in my head for Ghosts and Tea. The same goes with the book following Eidolon.

But, yep, jumping ahead of myself here. And I really can't afford to be so distracted by future ideas. I can, however, begin jotting down rough notes for A Most Unearthly Rival while taking a wee breather as I shift gears from one series to another.

For the time being, Agnes of Haywood Hall is momentarily shelved and purposefully ignored in favor of Eidolon, which I'm hoping to get back into either tomorrow or next week (depending on how I recover from a pretty hellish week at the day job). Separating myself from the story for a length of time will really help make the succeeding edits a lot easier to do.

In brief, the planned release date for this book is set in stone now, seeing as how all I need to do is focus on edits. The blurb is another story entirely, and I don't look forward to reaching that part of the process. Anyhoo...

I'm almost wishing for August back because it was a surprisingly mellow and chill month for me that, sadly, went too fast. In spite of everything that happened in the bigger world (natural disasters like hurricanes in the south and lightning-caused wildfires in California), it felt like a month that gave me a lot of much-needed downtime and breathing space. I wish I could have that again, but September started out with a bang and not in a good way at all, and I'm back to bracing myself for the future.

I've been on a massive Agatha Christie / Miss Marple kick as of late, and since I've seen nearly all of the classic Joan Hickson series, I've been trawling the 'net for the more recent ones with Geraldine McEwen and Julia McKenzie. I know those episodes are "updated" ones meant to attract a wider (perhaps younger?) audience, and I really don't care. I just love the idea of a sweet grandma type in a cozy mystery, and the classic series made me fall in love with the character.

Of course, since I'm not watching the episodes on an official channel for the series (Youtube), everything's piecemeal for me, and I've had to rein things back and review the episode guide online before moving past the fourth episode of the first season. Egad, I'm all over the place right now.

I'd love to read the complete collection of Agatha Christie mysteries for Miss Marple. I read some Poirot stories but not all, and I definitely would like to get a copy of that as well (short stories and novels, too). For the time being I only have Sherlock Holmes in my Kindle, and I've re-read those stories so many times now and would like to branch out further.

Brother Cadfael's another must-have collection, but I don't think the omnibus volumes are available in digital format. At least the last time I checked, which was some time ago (think at least a year), I came up empty and pretty disappointed. Maybe I'll just suck it up and save for a used set of the omnibus collection, but that's going to have to wait. And I mean wait. Money and physical space are now sticking points for me when it comes to my reading, hence my dependence on my e-reader.

At any rate, we shall see where this sudden cozy mystery kick will take me, inspiration-wise. Maybe nowhere since it's really all about forgetting the world for a moment, but who knows? That said, don't expect me to tackle a cozy mystery anytime soon or anytime, period. I'll continue to eat that up, but I simply don't have the writing chops for it.