Book Number Three In the 'Ghosts and Tea' Epistolary Series

All right. That wishy-washiness is challenging me into committing to whatever accounts I currently have, including this blog, Twitter, and Goodreads. So here I am, doing my level best to fire up the blogging engines because I really need to settle on something and stick to it, not be so flighty and prone to doubts.

So I've got a new story idea for the third installment of the Ghosts and Tea series, and I also have the book cover for it. It took me a while to come up with a proper title for it, and it was a bit of a struggle since I kept ending up with very long ones. 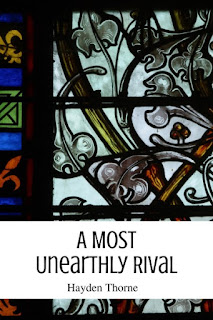 I figured it was only a matter of time before Jonathan Beverly found himself fighting for Frederick's hand while things remain touch and go with Prue, who still hasn't a clue as to the young men's true relationship. That's one ongoing joke in the series, anyway - that despite her sharpness in seeing through everyone's bullshit, Prue remains blind (and insists on treating Freddy like a child) when it comes to her nephew.

So! It'll be a fun one to tackle once I'm done with Eidolon. I'm about to cross the 10,000-word mark with this book while revising Agnes of Haywood Hall. It's coming along pretty well so far, and I'm making sure that I stick close to the same themes as the previous books in the series.

Fairy tale motifs everywhere - in case you haven't noticed, every main character so far is an orphan, and Emerick Sulzbach isn't an exception. His story as noted before has a Rebecca vibe to it, and I've got a ton of notes and rough outlines in my Bob Ross journal (because, hey, I love happy trees and happy accidents!) so that I already know how the story unfolds and how it'll climax and resolve.

I'll be talking more about this book as I go along, but as I type this, I'm feeling pretty happy with the plot.

Ironically, I'll chalk that up to the pandemic and how it's affected my day-to-day situation. If I've used writing as a means of distraction and play in the past, now it's my way of coping with the current state of the world. But it's still a very good thing in the end.

And as a final update, a quick mid-month signal boost: both Banshee and The Book of Lost Princes are 99 cents till the end of this month. Go here for more background info on the books.