Charging Down the Home Stretch (Oh, and 'The Old Guard' Rocks!)

Yes, it's been a while, but I've been pretty busy with work and with writing. The good news is that I'm down the home stretch with Agnes of Haywood Hall, and looking at the notes I put together for the final chapters of the book, it's safe to say that I'm on track to keep things well within target.
Twenty-five chapters are my aim for this book, and I'm at twenty-two now, which means I'll be done with the first draft by the end of July or the first weekend of August. So yay! August will be spent revising this book, submitting the final version of Automata, and getting started with the opening chapter(s) of Eidolon. 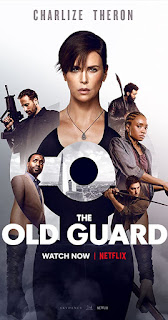 In other news, I watched The Old Guard the day it dropped, and I can't wait to dive back in and re-watch it. It's one hell of a ride though the plot does follow a familiar one (an origin story and the usual beats involving immortals and those who want to abuse them for money). What raises it well above other stories in the same genre, however, is the way every character is humanized so that viewers can easily root for them.
They're immortal, but they have an expiration date all the same, and I won't say anything more about the movie regarding that for fear of bad spoilers. There's even an overtly portrayed gay relationship with Joe and Nicky, and I was thrilled to learn that the original writer made it very clear that the gay relationship must be explored in the movie as he'd written it. No coy references, no off-camera or blink-and-you'll-miss-it treatment of the men's romance.
It's not given a sordid treatment, either, with Gina Prince-Bythewood infusing the relationship with a tenderness that's apparently her signature (I haven't seen her other films before, and I should rectify that). Kiki Layne, Matthias Schoenaerts, Marwan Kenzari, and Luca Marinelli are badasses in their badass roles, and having Chiwetel Ejiofor there, even in a supporting role, equals a roaring great time. It's violent and bloody without being gratuitous, too. I can handle that shit - not gore for gore's sake.
Strong characterization, a lot of heavy and bittersweet issues that usually dog immortality, great performances by everyone involved - I absolutely loved the movie. And because it's a Netflix original, it won't be pulled from Netflix's lineup, and I can go back and watch the hell out of it over and over again.
A lot of people are hoping that Marvel Studios would snap up Charlize Theron for a superhero movie, but as much as I love the MCU, I don't want to see her be a part of it. I love seeing her be a full-on ass-kicker in smaller, more independent films (or something big but less popular than the Marvel-made films like Mad Max: Fury Road) because she has a very specific presence that lends itself to more daring and less child-friendly fare.
I can't see anyone else but her for Atomic Blonde, for instance. I just can't. So, yes - massive, massive girl crush on Ms. Theron, and I hope to see more of her in the future, action film or otherwise.
at July 18, 2020