Yes, yes, yes, the book's general outline has come together very nicely, and I'm set to get started on the first chapter. I also thought I'd play with images here since I did mention something about a Rebecca vibe in reference to the story. Now I'm adding another to the mix, and no one should be surprised to find out what it is. And behold: 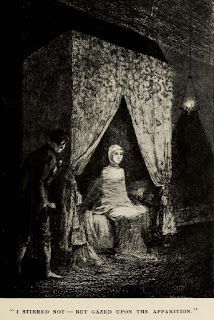 "Ligeia" is a big part of my basic inspiration food group since the idea of reincarnation in horror (versus religion) has always fascinated me. And Poe's creepy-as-hell story is the absolute ideal when it comes to how best to present the subject. Drugs and hallucinations aside (though they definitely add to the horrible process of Ligeia's return from the dead), the corpse of one person being taken over by the spirit of another (one who refuses to stay dead) is the perfect fuel for nightmares. 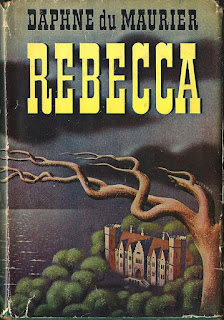 Eidolon is something like the love child of "Ligeia" and Rebecca. I look at Du Maurier's novel as a quasi-reincarnation story but from a more psychological angle since Rebecca is still "alive" or kept alive and haunting everyone who's known her - which ultimately reflects on the second wife and influences her reality. The theme of mirroring works perfectly with reincarnation in gothic horror. You can see something along those lines in "Ligeia", with Rowena turning into the poor replacement of the more "superior" Ligeia.

So that's where I'm headed with Eidolon. I'll be introducing the characters soon, and hopefully that first chapter - always the hardest for me to write - will be done by the end of this month.

And as a mid-month reminder, Arabesque is still on sale, and the e-book is priced at 99 cents till the end of this month. I also said before that I'll be adding an e-book sale in June alongside the publication of The Ghosts of St. Grimald Priory, and I've decided to make that e-book sale for A Murder of Crows. That book might not be two years old yet, but I really shouldn't be so fussy about it. So yes - keep an eye out for that book in June if you still don't have a copy.
at May 17, 2020