This post was shared today, celebrating Andersen's birthday. It's a long, detailed, and absolutely beautiful article on him, and there's so much of a bittersweet quality to Andersen's life as it is that reading about it today really hits home on so many levels. 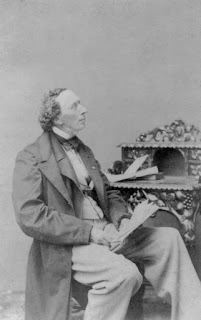 Though Andersen's humor is indeed a salient characteristic of the tales (when they are well translated), what many readers remember most about Andersen's work is its overwhelming sadness. The Little Match Girl dies, the Little Mermaid is betrayed by her prince (4), the Fir Tree lies discarded after Christmas, sighing over past glories. Even tales that end happily -- The Snow Queen, The Ugly Duckling, Thumbelina, The Wild Swans -- are heart-wrenching in their depiction of anguish endured along the way.

As a child, I found reading Andersen's tales a particularly wrenching experience -- and yet I read them over and over, both attracted to and disturbed by their unflinching depiction of pain. Read more...


That struck me the most when I was also much, much younger and eating up fairy tales left and right. Andersen's stories were more scarring, in a way, and while some stories are obvious about it ("The Little Match-Girl", which I can't reread without bawling my eyes out even at this age), others aren't as easily seen since I was too young to delve more deeply.

In that sense, I prefer his and Oscar Wilde's fairy tales over the more traditional ones put together by the Grimm brothers and the more "salon-friendly" ones written by Perrault and other French writers. It's the nature of Victorian literature, I guess, when it comes to the exploration of pain and sadness.

Not an effect of commemorating Hans Christian Andersen's birthday, but I'm feeling a bit down to the point where I'm back to considering abandoning my current pen name for a new one and have de-listed Masks: The Original Trilogy, though I did manage to write another chapter of Automata. It was a climactic scene, which also didn't turn out as awe-inspiring and jaw-dropping in terms of drama, but it ties in with the fairy tale-esque nature of the story and the series itself. It can still be messed with during the revision stage, so I won't be worrying about that right now.
at April 02, 2020