I can't wait to have my thumb out of the splint for good. Because once that happens, I'll need to go back to writing my drafts in longhand and then typing them later. It really hasn't been fun writing, to be honest, not because I'm out of ideas or I've fallen out of love with it altogether. But it's just the muscle aches that come from writing a single measly chapter of around 1,700 words. Ugh.

Anyway, I flip-flopped again on the writing schedule, and I set The Ghosts of St. Grimald aside in favor of finishing the final chapters of Automata. We're looking at around 25 chapters total for that book, and I just completed Chapter 19. So six more to go, which I now need to space out because of my old lady issues. Or aging lady issues, I guess. Either way, I'm not digging the process like before.

I'm looking at possibly this weekend or the end of March for the completion of the first draft of Automata. I'd like to devote all of April to the revisions and edits for St. Grimald and then follow that with the ones for this novel. However way it plays out, I just want to be completely writing-free in June, which is the release date for St. Grimald and the month-long break I need before diving back into the writing pool for next year's releases.

By the end of that month, anyway, I'm hoping to have Automata also revised and edited and submitted to Draft2Digital for listing. I'll be way ahead of the game since that book's planned release date is December, but I'd rather devote the rest of the year plugging away at the book that'll be published sometime in the spring of 2021. 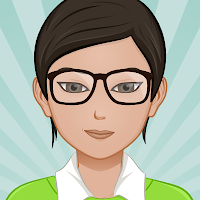 *points to image* For the morbidly curious. Yep, that'll be the closest you'll all ever come to seeing a real life picture of me. And this is kind of why I never participated in book promos over at Twitter since I'm not an #ownvoices writer. Me: straight, female, Asian. Who is also absolutely in love with folklore and literature from the west. So, yeah.

I also need a haircut, but with the shelter in place order, that's not going to happen anytime soon.
at March 24, 2020