Crimson Peak (And Some Thoughts About Ghosts In Films)

After years of sitting on things, I finally rented the movie and saw it today. A reward for finishing one more chapter for Automata, of course. :)

I'd have to say while Guillermo Del Toro wanted to do something in the classic Victorian gothic genre, the movie did manage to play up his strengths but also exposed his weakness when it comes to dialogue (or something closer to authentic dialogue in historical fiction, anyway). 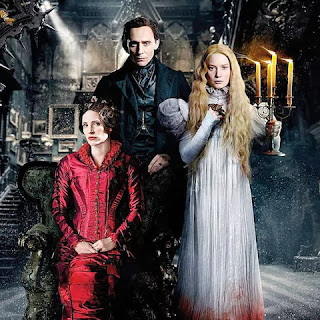 I loved the setting. LOVED IT. Of course. Victorian gothicism is my cup o' tea, and the decaying old estate with a hole in the roof was perfect. The dialogue, though, was pretty stilted and awkward, sometimes delivered by talented actors who don't seem comfortable in their roles. That's likely part of the reason historical stuff isn't as popular as other genres, and it seems that purposefully anachronistic writing for comedic effect is one way of bridging that gap. Or, at the very least, taking clearly dated language and "tempering" it for modern audiences.

Plot? Very good. I could have done without the violence and blood, to be honest. My tolerance for that and gore went away with my twenties. Characters? Fairly thin, I think, but it's a lot more plot-heavy than character-driven. I am pretty tickled by the fact that they have an Australian and a British actor (Mia Wasikowska, Charlie Hunnam respectively) cast as American characters and an American actor (Jessica Chastain) cast as a British character. Only Tom Hiddleston was pretty true to the background of his character, which is why he was the only one who looked pretty comfortable and at ease in his role. I love Wasikowska, Hunnam, and Chastain as actors in their own right, but they sure were pretty stiff in their roles.

That also reminds me that I've yet to see Wasikowska's Jane Eyre from - egad - 1996. Hello, Michael Fassbender as Rochester. Rawr.

More like monsters in a very Del Toro way if you know what I mean. When it comes to ghosts, I frankly prefer less CGI worked into the appearance / presence, and so far, visually, the most recent The Woman in Black with Daniel Radcliffe wins that hands down. I think what works the best in that movie (even though overall, I wasn't impressed with the adaptation) is the way Jennet's ghost was handled. Ignore the annoying jump scares the director used liberally throughout that film. I hate them. Always will.

But the quiet moments where the camera moves slowly and gradually reveals the ghost just standing there, watching everything - that is a damn effective way of capitalizing on the creepy factor of apparitions. It's the more visual version of what movies like The Changeling (1980) manage to do, which is to suggest the presence of a ghost without jump scares. Glimpses of the ghost in the water (tub and the well) last a second or two, and that's it. All other images are from flashbacks, when the boy was still alive.

The slow building up of atmosphere and tension is, I think, paramount in the use of ghosts in film, and for a ghost story fan like me, it's pretty frustrating seeing movies come out treating ghosts like actual monsters that rip people apart or somehow physically interact with them as opposed to communicate in ways pretty much unique to ghosts.

That said, Crimson Peak is well worth a view if only for the set pieces. Not Del Toro's best (Pan's Labyrinth remains unchallenged IMHO), but a pretty grim way of escaping reality for a couple of hours.

Link to video for those reading this on Goodreads.

And speaking of anachronistic historical stuff for comedic effect, the trailer for The Great really floats my boat. Sometimes you need a generous dose of irreverence when it comes to history, and during a global disaster like COVID-19, some dark humor (or just plain humor) is needed. It's making me desperately itchy for Blackadder again, and the nostalgia factor of that series is excessively high for me.
at March 28, 2020