This month has proven itself to be somewhat a nightmare, but it's at least ending on a more hopeful note than before. I'm still keeping a very, VERY low profile over at Twitter, hence my removal of the Twitter gadget on this blog, but I may be reinstating it once I get my feet back under me, social media-wise. For now I'm happy sticking to a tiny follow number and an almost non-existent follower count. I'll (maybe) eventually beef up my circle as the time goes, but I'm not actively or aggressively doing it. I find that I still need the space and the quiet in order to get myself fully centered again.

Anyway, here's that bit about a visual. 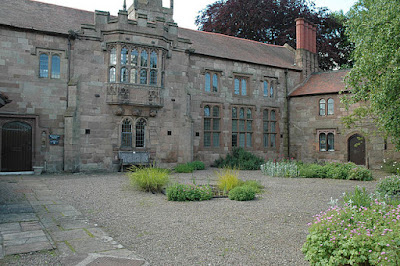 Monmouth Priory (pictured above) is the physical inspiration for St. Grimald Priory in my current WIP. I especially love the front courtyard, which includes the oriel window and the narrow gate. I'm still trying to work in the priory's interior, and I realize I need to go back and do some serious rewriting of earlier passages pertaining to the (fictional) priory's idiosyncracies. They're meant to be clues, alerting the reader to the priory's haunted situation.

But they're also so haphazard and clearly the workings of people with zero knowledge of the supernatural, which leaves Prudence (Prue) completely baffled as to why her new home is the way it is.

It's this inevitable rewrite that should help propel the story forward with a much better momentum since those same details make up a good part of why my pace has slowed to a crawl. Unlike my previous books, this slowing down isn't dire, and I'll be sorting things out this weekend while moving forward with a new chapter.

As for that bit about Curiosities, it's got everything to do with the series definition or description. I described it on my sidebar as:

The Curiosities series is a series of books whose central conflict involves a specific supernatural element with a specific agent who travels the world seeking victims. Like the Arcana Euoropa, the stories are set in an AU Victorian Europe where magic and same-sex relationships are common. All books in this series are novels.

I'd like to lightly revise that and say that it's a series of dark fairy tales because, to be honest, the books are jam-packed with fairy tale motifs. One niggling issue I have with my own books is that I'm always worried that by defining them as historical fantasy, I've limited my scope to more realistic or at least region-and-time-specific elements.

Like, for instance, Sweden being the setting for The Amaranth Maze. I tried to incorporate a number of more historically accurate details in the book despite the obvious AU nature of the story and the series. Agriculture and finance, for instance, figure largely in the novel, in addition to advances in botanical science (i.e., I took my inspiration from Carl Linnaeus). Plus bits about everyday life like meals.

In Dollhouse, there's a lot more of the fantastical there than the historically accurate. Unlike Arcana Europa, this new series will lean more toward the speculative and less on the realistic, the general locations and the use of honorifics being the main things cementing the story to the universe I'm trying to create.

The same thing is happening with Automata, which is set in an AU Venice, focusing on Alexej Sauveterre and his own terrifying brush with the occult. That said, the same heavy use of fantastical elements outweigh anything historically accurate, and that's why I'd like to revise my definition of the Curiosities series.

At the very least, that'll free me to really indulge in folklore motifs and inspiration, and I wouldn't have to worry too much about how close details are to the real world as a way of anchoring the stories fully into their setting. Another good thing about this revision is that it allows me to really separate this series from the Arcana Europa. At the moment, there seems to be not much of a difference between the two series, and I'd like to make that gap a lot wider than it currently is.
at January 31, 2020